2 weeks to go until the Draft, in what is regarded as one of the most talented draft classes in a number of years. The excitement is building and to add to the intrigue, I have added in trades that could make some sense as teams try to find their stars of the next 10-15 years.

Garrett is widely regarded as the best prospect in this draft and the Browns have a big need for a pass-rusher. It’s a no-brainer. Not even the Browns can screw this one up.

San Francisco desperately need a QB but may be prepared to play a waiting game with Kirk Cousins’ situation in Washington still unclear and Brian Hoyer being brought in as a stopgap. The move to a 4-3 Defense makes Thomas a better fit at Defensive End in SF than Jonathan Allen.

TRADE (Carolina trades with Chicago to move from 8 to 3)

The first of six 1st round trades in this mock. The Panthers are said to love Fournette and don’t want to wait and hope both Jacksonville and New York pass on him. Chicago is happy to move down, pick up an extra pick and wait to see which elite prospect drops.

The Jags have invested a number of draft picks and a lot of money into their Defense in the last few years and invest some more here, finding the future leader of their Defense for the next decade. Secondary players typically don’t go this high but Jamal Adams is not a typical secondary player.

Tennessee’s big weakness last season was their Pass Defense and despite spending big on Logan Ryan and Johnathan Cyprien in Free Agency, they will look to upgrade the secondary early in the Draft as well. This pick was a toss-up between Lattimore and his college teammate Malik Hooker and Lattimore wins out due to Cornerback being the bigger need.

Trade number two sees Cleveland move up for their Franchise Quarterback, Ohio native Mitchell Trubisky. New York is a mess and needs as many picks as they can get to fill their numerous needs. Meanwhile, Cleveland has needed an answer at Quarterback since forever. Will Trubisky be the answer or just another name on this… Probably a dream scenario for San Dieg…I mean Los Angeles. Hooker is a top 5 prospect and has drawn comparisons to Ed Reed for his ball-hawking skills. Seems like a great fit.

Chicago is happy to move down a few slots and pick up an extra pick that may come in handy when targeting/trading up for a Quarterback later on. Adams, Hooker and Allen were the 3 players that the Bears had in mind at 3 and the chances were 1 would fall to 8. In this case it’s Allen, who will fill the hole at 5-tech to complete a very strong looking Bears front 7.

Cincinnati’s Offense lacks a spark without AJ Green, as shown in the second half of last season. Adding another reliable threat in the passing game will be high on the Bengals’ offseason priorities.

Difficult one to judge, as Buffalo has bigger needs elsewhere but OJ Howard might just be too good to pass on. Buffalo sees the impact of an elite Tight End twice a year in the form of Rob Gronkowski and they badly need another option to draw attention away from Sammy Watkins.

New Orleans could pick just about any defensive position and it would fill a need. They’ve had below par Linebackers for as long as anyone can remember. Foster can be to the Saints what Kuechly, David and Jones are to their division rivals.

New York could look to trade down again but with the Cardinals waiting behind them for the big arm of Mahomes, they will take their QB and find other answers elsewhere. Mahomes may not be ready to start from Day 1 but he has all the physical tools required in an NFL QB.

TRADE (Denver trades with Arizona to move from 20 to 13)

This pick should go down well with Denver natives. Son of ex-Bronco WR Ed, McCaffrey may be the most exciting Offensive player in the draft. CJ Anderson hasn’t shown he can handle a full workload over a season so adding McCaffrey to split carries and be a weapon in the passing game makes a lot of sense.

Cornerback and Wide Receiver were the two glaring holes in the Eagles roster this offseason. The signings of Alshon Jeffery and Torrey Smith will aid Carson Wentz’s development so Philly go Defense here and grabbing a talented CB to help contain the likes of Odell Beckham and Dez Bryant seems logical.

Indianapolis has holes all over the place that made this pick a complete toss-up. Reddick has been climbing up draft boards in the last couple of months and his versatility gives the Colts options.

Ozzie Newsome has a reputation as a good drafter, despite being a little hit and miss in recent years. I have to think the Ravens would turn their card in quickly if Barnett is available at 16. Baltimore’s need for a pass-rusher is dire and it’s possible Barnett is BPA.

Might seem a bit of a reach but the rumour is that Washington like Jackson. He can play outside or nickel corner as well as being a weapon on Special Teams. His athleticism is off the charts.

Tennessee solved their CB problem earlier with Marshon Lattimore, now look for an explosive playmaker on Offense. And John Ross is not just any explosive playmaker, bringing solid route-running ability and hands to go with a combine record 4.22 speed. Teams will have to respect Ross’ deep speed, allowing Demarco Murray and Derrick Henry more room to run.

Jameis Winston, Mike Evans and Dalvin Cook could form the NFL’s next ‘triplets’. Cook has said he’d love to play with his old FSU teammate Winston and he may just get his wish. Doug Martin has had 3 poor seasons in the last 4 and is overpaid, while Charles Sims has struggled to stay healthy since entering the league.

The Cards may have gotten a steal here, grabbing the long-term successor for Larry Fitzgerald. Davis is the all-time leading receiver in College Football history (albeit against poor competition) and his skills should see him become a reliable target at the next level too.

Detroit keep it local, adding a much-needed pass rusher to play opposite Ezekiel Ansah. Charlton is raw and will likely be used as a situational player to start with but could grow into a double-digit sack-getter with some development.

Taco Charlton would’ve been a nice selection to add young pass rush and learn from one of the best in Cameron Wake but it is not to be. Linebacker has been a weak spot for the Fins lately. Kiko Alonso is talented but injury prone so adding an athletic LB wouldn’t hurt.

The first Offensive Lineman off the board heads to The Big Apple. Ereck Flowers has struggled since being drafted 2 years ago and looks likely to be moved to the right side. There are 3 Tackle prospects getting 1st round consideration but Ramczyk will be the selection as he appears the best fit to play on the blindside.

TRADE (Chicago trades with Oakland to move from 36 to 24) 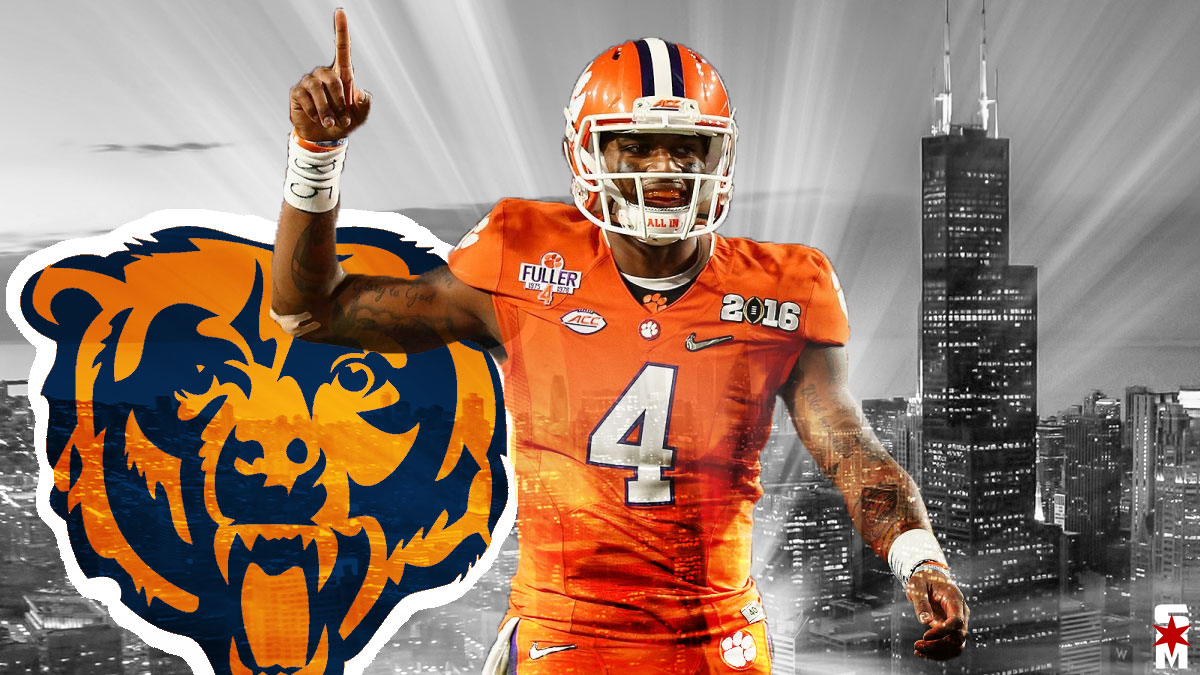 Mike Glennon will not and should not stop Da Bears taking a QB early in the draft. This pick will excite a fanbase that has been searching for a Franchise QB since the Stone Age. Ryan Pace seems to be showing more interest in Watson than any other QB in this draft and makes his move to grab his guy.

Ignore what I said earlier about the 49ers waiting on Kirk Cousins, there’s no guarantee he will become available and Kyle Shanahan gets the chance to develop a young QB in his first year as a Head Coach. John Lynch was said to be very impressed with Kizer when he interviewed him earlier in the draft process.

There has been some uncertainty around Richard Sherman’s future in Seatte recently. It’ll probably pass and amount to nothing but regardless, the Seahawks could do with an upgrade across from him. Kevin King’s measurables fall in line with what the Seahawks look for and he joins the ‘Legion of Boom’.

There’s been rumours that the Chiefs are looking for a long-term answer at QB but I can’t see it and the way the board has fallen does not allow them to take one of the top 4 QBs. Instead, they grab another edge player to team up with Justin Houston. Dee Ford has been inconsistent thus far and Tamba Hali is old.

Dallas got picked apart by Aaron Rodgers in the playoffs, when their average Defense was finally exposed. Strong Safety Barry Church has moved on to Jacksonville so Melifonwu will take his place. The London-born safety is a freak athlete, standing 6’4″ with a 44inch vertical leap and possessing 4.4 speed. He joins fellow combine star and UConn alumni Byron Jones in the Cowboys secondary.

Three 1st round selections for Cleveland! They have plenty of ammo in terms of draft picks over the next 2 years to make moves for their targets. Baker has drawn Tyrann Mathieu comparisons for his instincts and playmaking ability, which make up for his lack of physical stature.

Pittsburgh has shown interest in Peppers recently. He would give them plenty of versatility, as he was used in virtually every position on the back end at Michigan, as well as Offense and Special Teams. He looks like a Troy Polamalu-style roaming safety or possibly a slot corner at the next level due to his man coverage ability.

The Super Bowl Champions of the first 3 Quarters have added some good young players on Defense lately and add another here. Vic Beasley is the only player on the roster that can consistently get to the QB, tallying 15.5 in 2016, while nobody else managed 5.

Humphrey is expected to go higher than this but nobody within the Saints Front Office is complaining. He follows his college teammate Reuben Foster in heading from Tuscaloosa to New Orleans.